Belo Sun Mining Corp. (“Belo Sun”) (TSX: BSX) is pleased to announce that it will be initiating exploration activities on its 175,000-hectare land package in northeastern Brazil. The three main objectives of the 2017 exploration program are as follows:

Stéphane Amireault, Vice President of Exploration for Belo Sun, commented, “We are very excited to re-initiate exploration on our large property, which covers most of the 120-kilometer-strike Três Palmeiras greenstone belt. Currently, drilling has been focused in the North Block and South Block, on which we have drilled approximately 215,000 meters and 25,000 meters, respectively. With the 2017 program, we look forward to demonstrating the possibility of new and expanded gold mineralization on our property.”

An initial budget of approximately $5 million has been allocated to the 2017 exploration program, for which further details are provided below.

Details of the 2017 Exploration Program

An updated geological model was recently generated for the two current mineral deposits, Ouro Verde and Grota Seca. This exercise resulted in better geological understanding in the structural controls of the deposits.  This information has been integrated in the exploration target boundaries, which led to the strike length of both deposits hosting the mineral resource being subdivided into six domains (see Figure 1). 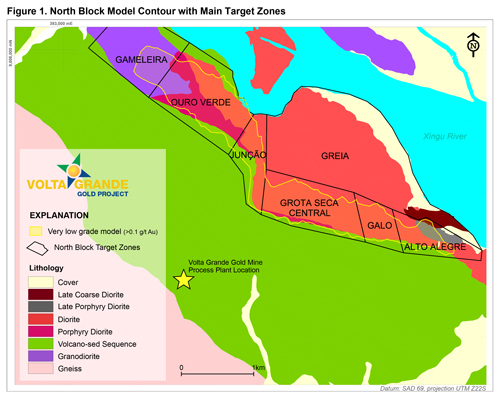 Following the completion of an updated geological model in the South Block, a drilling program will be designed to target areas distributed in the granodiorite near the contact with a meta volcano-sedimentary sequence (Figure 2). The objective of this drill program will be to increase the existing estimate of mineral resources and demonstrate continuity along the target zones. 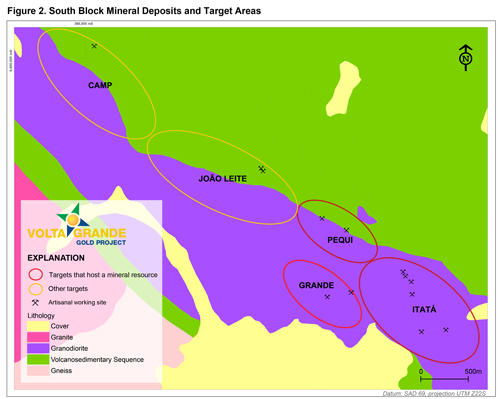 The Belo Sun exploration claims covering the greenstone belt has been divided into four sectors (See Figure 3). Each sector is bound by a cross-cutting river and displays a set of coherent geological features.

Geophysical targets along the entire strike length of the greenstone belt have been defined by comparing the geophysical responses with the corresponding signature of North and South Block Deposits. Furthermore, occurrences of significant artisanal workings were mapped and initial rock geochemistry appraisal were conducted for some of the workings.

A systematic review of these targets will be completed to determine areas that may benefit from ground soil and ground geophysical surveys. This additional information is expected to assist in preparing future drill targets. 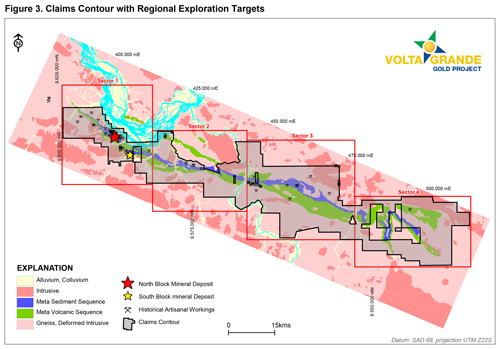 1. Details Related to the Mineral Resource and Mineral Reserve Estimates

The technical information in this press release has been reviewed and approved by Stéphane Amireault, MScA., P. Eng., VP of Exploration for Belo Sun and a Qualified Person as defined by National Instrument 43-101.

Belo Sun Mining Corp. is a Canadian-based mining company with a portfolio of gold-focused properties in Brazil. The Company is currently focused on starting the construction and development of its 100%-owned Volta Grande Gold Project.  Belo Sun trades on the Toronto Stock Exchange under the symbol “BSX”.  For more information, please visit www.belosun.com or contact Investor Relations at +1 (416) 309-2137.